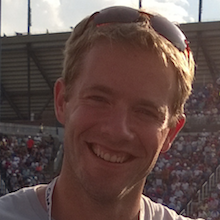 A short while back I gave my first live webinar, on getting started with Git and GitHub. It was both exciting and a bit terrifying. I’m gearing up for similar sessions at work to get folks going with our version control solution, Stash.

When I look at version control as an IT professional, one pain point that we could help with stands out. In addition to changing their workflow and learning version control, folks are now working with files and folders in source control. Not where they live. Wouldn’t it be handy if we could use version control, and not worry about remembering to be sure to move the files to their appropriate homes?

This post will discuss a simple PowerShell based deployment solution: PSDeploy.

So, with all these solutions, why duct-tape something together?

This is a quick and dirty module that simplifies deployments. You create a deployment config file, PSDeploy reads it and runs your deployment(s).

Let’s looks at an example deployments.yml and the outcome of invoking it.

Here’s a project I’m working on. I want to deploy MyModule to a few paths every time I push a commit. I should probably gate this with Pester tests as well : ) 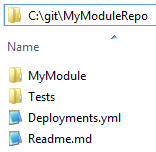 We can verify how PSDeploy will parse this: 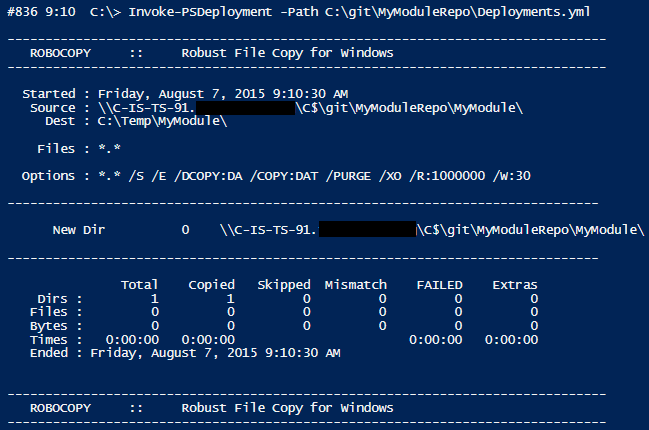 If we check the destination paths, we find MyModule has been deployed! 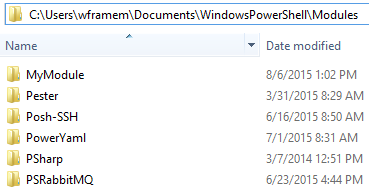 What happened under the hood?

If you prefer illustrations, here’s quick diagram of a similar deployment:

That’s pretty much it! Instead of defining all this code in my continuous deployment system, I just run Invoke-PSDeployment.

Running through the code above, we see a few commands you can work with:

Let’s put this to work in a few real world scenarios.

I want to deploy C:\Git\MyModuleRepo\MyModule to \\Server\Modules. How can I use PSDeploy to do this?

First, we add a config file, C:\Git\MyModuleRepo\deployments.yml. Here’s the content:

We verify that the deployment will do what we want:

Looks good to me! In our continuous deployment solution, we simply run this:

This gist shows how you can test out PSDeploy without setting up any fancy tools. All you do is create a dummy folder to deploy, targets to deploy it to, and invoke the deployment.

So! I’m using Jenkins for continuous integration and trying to shoehorn in a deployment. I’m running into trouble: Jenkins is running with an account that doesn’t have the right privileges to deploy to the targets.

We can use the FilesystemRemote deployment type, which will run the robocopy and copy-item commands in a PowerShell remoting session with appropriate credentials. I know, it’s silly, pull requests for a more appropriate solution would be welcome : )

Ahead of time, I locked down the Jenkins server and set up EnvInject, with a little help from Matt Hodgkins’ post.

Next, I set up a project with the following PowerShell build command. I’m omitting the testing steps for simplicity. You should strongly consider gating your deployments using Pester tests.

This looks a bit complicated, but all we’re doing is loading up PSDeploy, grabbing credentials for our deployment, and kicking off the deployment with some parameters. You can run Get-Help Invoke-PSDeployment -Parameter DeploymentParameters for more information on passing parameters to a deployment script.

That’s about it! Maybe SomeSessionConfig is a delegated endpoint, which works around the double hop issue. I could also configure a CredSSP endpoint, but that might draw the wrath of the security community. Tip: Do consider the risks of CredSSP, but if you still have admins using RDP, you’re already using CredSSP, and you have bigger problems to worry about : )

We just walked through a few example deployment types. What if you want more deployment options?

I’m probably getting ahead of myself, but I tried to make PSDeploy somewhat extensible. Follow these steps to add a new deployment type:

This file is stored in the root of the module, although you can move it to a central spot. It stores the associations of deployment types to deployment scripts.

For example, I might add support for SCP deployments:

These are stored in the PSDeploy folder under PSDeployScripts, although you can point to other paths in PSDeploy.yml

Here’s how I implement the deployment parameter in the filesystem deployment scripts:

If you want to include options in a deployment config file, similar to the mirror option we use in Filesystem deployments, just include them in deployments.yml.

Here’s an example extended deployment config with a hostname and port option:

We can explore this with Get-PSDeployment to see what we would work with in out deployment script:

That’s pretty much it! I’m hoping that we get more IT professionals using version control, continuous integration, continuous delivery, and similar solutions. We might see more (and better!) tools to simplify and streamline using these solutions as an IT professional.

Don’t be afraid of tools and ideas traditionally associated with developers or ‘DevOps’. Even if you work in an enterprise that has few if any developers, these tools and the ideas behind them can benefit IT as a whole.

If you haven’t already, you should consider joining the open source community. Suggestions, pull requests, and other contributions to PSDeploy would be more than welcome!